You wouldn’t know it from the non-existent, non-headlines, but the town of Hialeah, Florida suffered its worst mass murder and hate crime on Sunday when Gerardo Regalado shot seven women, killing four.  All the victims were or are mothers.

Regalado now joins the ranks of other woman-killers who curiously avoid the “hate crime” label, such as George Sodini, the Pittsburgh gym killer who wrote rambling anti-female diatribes before murdering three women, and Charles C. Roberts, who sent all the male pupils away from an Amish schoolhouse before binding and shooting 11 little girls, killing five.  Apparently, shooting every single woman in a restaurant while leaving the men unharmed is simply no proof that you harbor some murderous grudge against the female sex, at least according to the hate crime experts, who dread the day when somebody peers up from the statute book and says: “Hey, wait a minute, doesn’t gender mean female sometimes?”

You know, like killing 3,000 Americans on September 11 counts as anti-American nationality bias crime?

No, you won’t hear a peep from the experts, unless, that is, they feel the need to do damage control by going on record to deny that targeting females is anything like targeting gays, or ethnic minorities, or Hispanics, or the homeless, or any of the other extremely rare victimizations that contribute to their portrait of America as an immigrant-bashing, racist, homophobic place.  Counting women wouldn’t just crowd the picture frame: it would utterly overshadow all other crimes designated “hate,” and you can’t have that when the picture’s the point.

And so, for instance, in the wake of George Sodini’s carefully premeditated, females-only bloodbath, hate crime experts James Allen Fox and Jack Levin trilled shamelessly in the media that “a friendless society,” not the killer’s own clearly stated anti-female motives, was to blame for the women’s deaths.  That was a close one, owing to Sodini’s voluminous scribbling on the subject of hating women, that is, hatred of people who happen to be female and not male, which looks an awful lot like anti-female bias to anyone except the highly trained.  Fox and Levin had to do a real song-and-dance to avoid the subject of anti-female bias crime in that case.  And so they did, frantically pointing fingers at the economy, the internet, distracted parenting, telecommuting, and (quite horrifyingly when you consider how much this sounds like Sodini himself) people who don’t smile at strangers at the gym.

Yes, the nation’s foremost hate crimes experts looked at the mass slaughter of random women in an exercise club, and rather than acknowledge that the killer left behind a giant, pulsating neon arrow pointing at his own irrational loathing of women, they blamed the victims, musing that if only the dead women had previously been nicer to a future killer they never actually met, he might not have needed to mow them down at a later date.

That’s why the experts get the big bucks.  And the media follows in silent lockstep.

Fox and Levin haven’t weighed in on the Gerardo Regalado killings yet (maybe they haven’t heard about them, given the weird dearth of coverage).  Neither have Mark Potok, Brian Levin, the current or past leadership of the N.O.W., Eric Holder, or any other official or unofficial hate crimes activists, but if they do, it will doubtlessly be to deny that singling out female victims and shooting them in the head has anything to do with bias or hate, especially this year, when the official theme of hate crimes activism is the purported “rising tide” of anti-immigrant hate.

It certainly wouldn’t fit the activists’ message to have a Hispanic immigrant accused of committing the worst hate crime since Maj. Hasan shot dozens of innocent Americans, killing 13, and the “underwear bomber” Umar Farouk Abdulmutallab tried, but failed, to slaughter hundreds of American citizens by crashing a plane over Detroit.

Oops.  Scratch that.  Those aren’t being counted as hate crimes either.

Actually, if Gerardo Regalado’s murders were recorded as hate crimes, he wouldn’t even officially be counted as “Hispanic” because he’s the offender, not the victim. When Hispanics are the victims of hate crime, they’re designated “Hispanic.”  When they’re the perpetrators, the government counts them only as “white” or “black” (you can guess which one is useful to the activists).  That this is happening is not some paranoid persecution fantasy lurking in the minds of racists, but a mere fact of the hate crime statistics-gathering protocols implemented under Eric Holder’s leadership when Holder was point person on hate crimes in the Clinton Department of Justice.

Sort of like, “Singling out females to kill has nothing to do with hating women, even when you leave a note in your gym bag explaining that you are killing women because you hate women.”

Or, “Raping and beating a woman nearly to death because she wouldn’t dance with you does not indicate gender bias.” 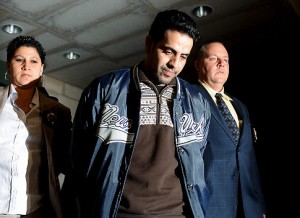 Or, “killing Americans whilst screaming anti-American slogans is not an anti-American-nationality hate crime.”

You can see why we need experts to explain all this to us.

Here is the Miami Herald’s description of the murdered and wounded women. Remember, according to Attorney General Eric Holder, hate crimes are “far worse” than these crimes:

• Maysel Figueroa, 32, of Hialeah, who lived with her husband and their small son. She started work at Yoyito only a few days ago, after leaving a job at a discount store.  Late Sunday, Figueroa called her husband and said she would be home soon, the neighbor said. She didn’t arrive, so he went to look for her at the restaurant.

• Lavina M. Fonseca, 47, lived with her daughter across the street from Figueroa. She previously lived in Cuba’s Guantánamo province and studied Spanish and Russian literature at the University of Havana. She came to South Florida less than a year ago.  Fonseca’s daughter, Lexania Matos, 18, is a Hialeah High student.

• Zaida Castillo, 56, of Hialeah, followed her only daughter, son-in-law and grandson from the rural Cuban town of Quivicán to the United States about six years ago. In Cuba, Castillo was a vet, treating chickens on a farm. She cooked in Yoyito’s kitchen and tried to support her elderly mother back in Cuba. Castillo planned to visit her mother in November.

Three other victims who remained hospitalized Monday night include:

• Yasmin Dominguez, 38, believed to be Molina’s cousin, who was there to pick her up, or protect her from Regalado. She was the first to encounter Regalado outside. He shot her, then walked into Yoyito. She remains in critical condition at Jackson Memorial Hospital.

• Ivet Coronado Fernandez, who came from Havana about four months ago, lived with her mother in Hialeah. She was shot twice. Coronado called her brother Felix Fuentes from the restaurant and told him she had been shot. Fuentes said Coronado underwent two operations but may lose her arm.

• Mayra de la Caridad Lopez, 55, of Hialeah Gardens told her husband from her hospital bed Monday night she might have survived the massacre by diving under a metal table. She was washing pots and pans when she heard gunshots and screaming.  As Regalado entered and began shooting, De la Caridad Lopez dove for cover but was shot in the back.  It was supposed to be a happy day for her. After being unemployed for months, Sunday was her first day on the job at Yoyito’s.

1 thought on “Gerardo Regalado — Thank God It Wasn’t A Hate Crime: He Was Just Shooting Women”

“Michelle & Barack & Bernardine & Bill: The Real Story of the Obamas and the Terrorist Couple”

And How Chesa Boudin Was Involved

“Why isn't Rape A Hate Crime Against Women?”

A chapter from "Hate Crime, Gender and Rape" by Tina Trent