Last week I spoke at a conference about George Soros, organized by Cliff Kincaid of America’s Survival.

Interviews with me and the other speakers appear here:

I’m also working on a project detailing Soros’ top grantees and what they do with their money.  What does this have to do with crime?  Soros subsidizes virtually every pro-criminal, anti-victim, anti-police action in this country, whether in the courts, the halls of government, or on the streets.  I’ll be writing more about this in weeks to come.  Meanwhile, you can see profiles of his top 25 grantees at the Soros Files Website.

One of the other speakers at the conference was Larry Grathwohl, who risked his life by infiltrating the Weather Underground and working undercover as an informant for the FBI when the Underground was busy carrying out murderous attacks on police and soldiers.  I remember reading Larry’s book about the Weather Underground when I was in high school, at a time when terrorists like Bernadine Dohrn and Bill Ayers were still revered as heroes in the lefty circles in upstate New York where I lived.

Now they’re just revered as heroes at places like Northwestern University, where Dohrn is a professor of law working to cripple our already-hobbled criminal justice system by imposing international “human rights” protocols on our courts.

That sounds crazy, doesn’t it?  I wish it were.

Professor Dohrn, not quite yet sipping eggnog at the Northwestern Law X-mas Party 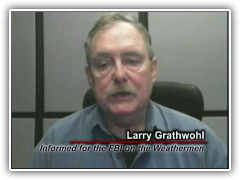 Copies of Grathwohl’s book (written in 1976) are still bouncing around on the internet.  He says he’s putting out a new edition soon — I hope so.  Meanwhile, you can find a used copy on Amazon — but there’s literally just a few left.

Another speaker at the conference was Trevor Loudon, who runs the extraordinary KeyWiki site:

KeyWiki is a bipartisan knowledge base focusing primarily on corruption and the covert side of politics in the United States and globally. While particular interest is taken in the left, KeyWiki serves to expose covert politics on both the left and the right of the political spectrum.

Loudon lives in New Zealand, but he knows more about state level-elected officials in America than anyone I’ve met.  Go figure.  Check your own state legislators in the KeyWiki database — you might be surprised.  Loudon is in the U.S. promoting his new book which documents Obama’s political and personal ties to radicals, communists and Marxists who openly seek to overthrow the American government: it’s called Barack Obama and the Enemies Within.  Even ardent Obama supporters ought to be willing to give the evidence a fair hearing.

I was standing next to Larry Grathwohl outside the White House last week, after visiting the (sad, creepy, and malodorous) Occupy D.C., and it dawned on me that Larry’s book was probably the only negative accounting of the Weather Underground that had crossed my path until 2001, when Bill Ayers put his foot in the hornet’s nest with a stunningly offensive interview bemoaning the fact that he “didn’t do more” — didn’t set off more bombs and kill more people . . . an interview that was published in the New York Times on the morning of 9/11 and therefore perhaps the supremely ironic final read of some who perished in the Twin Towers that day.

One person — one book — telling the truth can still change history.

“Why isn't Rape A Hate Crime Against Women?”

A chapter from "Hate Crime, Gender and Rape" by Tina Trent